Whenever you operate a centrifugal pump of any design there are always dynamic forces at play. A good engineer will address all of the forces in the pump and create designs to reduce and or eliminate the effects. There are several dynamics to deal with in the pump, but the two main ones are the axial and radial forces.

Axial forces are those that act on the rotor in a direction parallel to the shaft. These forces exist due to higher pressures acting on one side of a surface and/or acting on a larger area. The main surface area is the impeller shroud(s).

In large multistage pumps the axial force is mostly neutralized by the use of a balance drum. In other multistage pumps it can be managed by using the opposed impellers method. For example, in a 6 stage pump, 3 impellers face one direction and the other 3 face the opposite way.  Another example is the horizontal split case pump where the impeller has two inlet eyes that are opposed at 180 degrees to each other. The net effect is an almost balanced (negating) axial force.

ANSI style (B73.1) pumps are end suction types that use semi open impellers 99% of the time. These impellers have a shroud on one side only. This geometry makes them easy and less expensive to manufacture. However, a downside consequence is an impeller with higher unbalanced axial forces.

Under normal operating conditions there will be a much higher force on the back of the impeller than on the front. The resultant force will attempt to push the pump impeller towards the suction. The thrust bearing counteracts that force. It is not uncommon for a medium frame size ANSI pump to develop up to 850 pounds of force exerting in the direction towards suction. The axial force will lessen with higher suction pressures.

A designer could simply install bigger thrust bearings and not worry about the axial force, but the bigger bearings require bigger shafts and that requires bigger housings and all those things result in a pump that has both a bigger initial cost and a bigger maintenance cost. 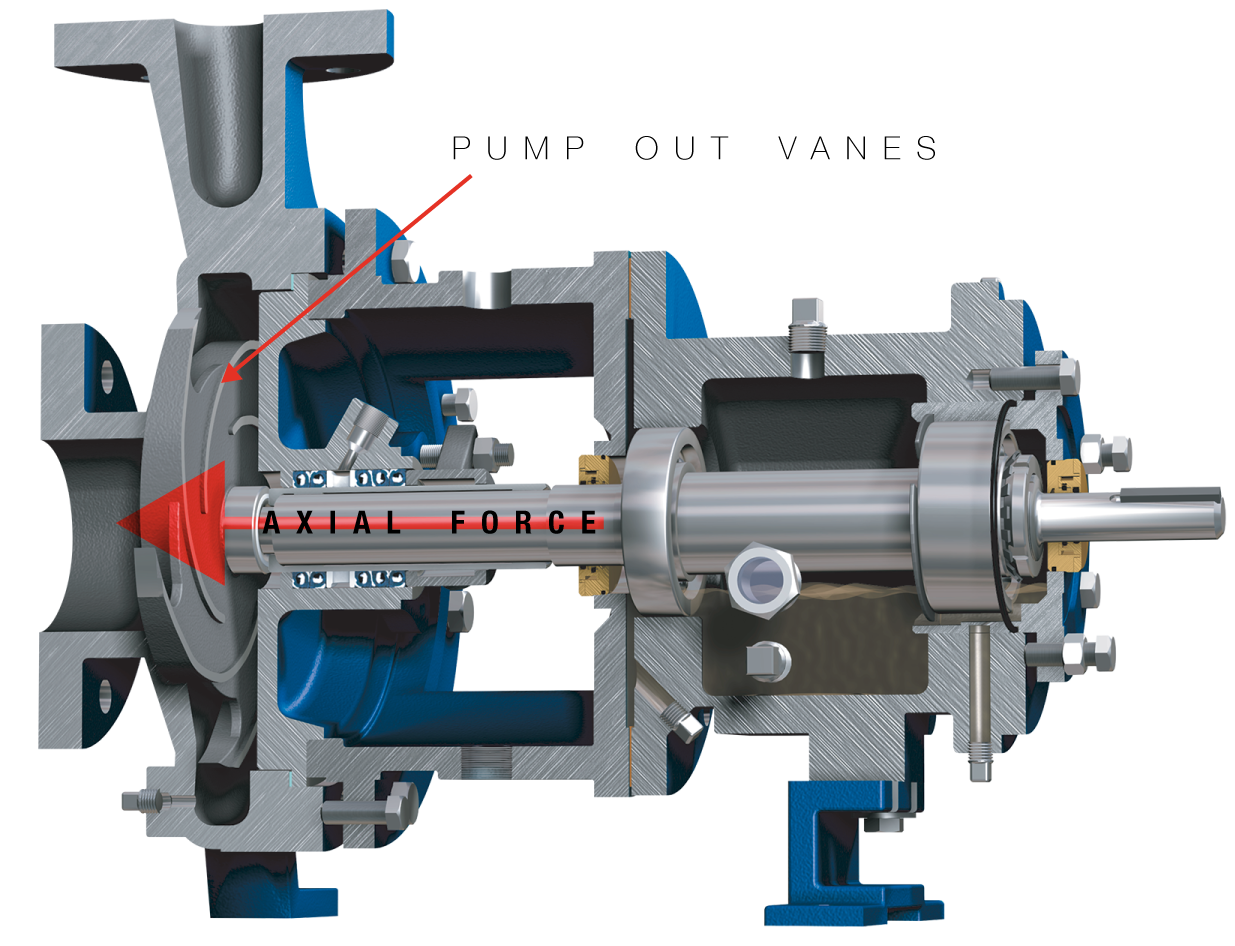 The method most pump engineers use is to reduce the axial force behind the impeller. This is where impeller balance holes and or pump out vanes come into play as an axial force reduction method. You can’t get something for nothing so there is a small tradeoff with efficiency and power when using this approach.

For those of you that are interested in the details as to how and why pump out vanes and balance holes actually work, I will compose a more detailed article for Pumps and Systems magazine in the near future.

We are your Best Value by
“providing quality pumping
products in a timely manner,
at a fair market price.”